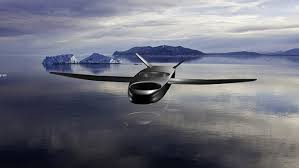 There are currently several ongoing efforts to develop small JP5/8 fuel burning engines in the power classes and power to weight ratios being discussed here, including lightweight versions for aviation applications. For example, the opposed cylinder (OPOC) engine development program (FEV Engine Technology, Inc.) is developing a light weight, high powered diesel engine that is being sized for the A160.

I am basing it on some well known engineering facts, materials aside: ””The high compression ratio of diesel engines allows for better efficiency compared to gasoline engines, Angner said, but this high compression ratio also requires more robust parts, which in general are considered to add longevity to the life span of the engine, because diesel engines use compression ignition, which can quickly ruin a gas engine, they must be made very tough. And because they come form a workhorse heritage, they tend to be very reliable and need a minimum of care””

2nd Generation 3.5L Ecoboost would include Direct and Port Injection.

Code named Bobcat, the new twin-fuel engine from Ford is based on a 5.0L V8 engine block but uses E85 cylinder injection and gasoline port injection. The engine was co-developed with Ethanol Boosting Systems, LLC of Cambridge, Massachusetts, which calls its trademarked process DI Octane Boost. The direct injection of ethanol increases the octane of regular gasoline from 88-91 octane to the maximum 130 octane. The Bobcat project was unveiled to the United States Department of Energy and the SAE International in April 2009.

The experimental engine was limited by the engine block’s ability to handle higher compression ratios.”

Part of Ford’s plan to invest $9 billion into its United States operations over the next four years, the $145 million investment in Cleveland will create or retain 150 jobs. Those new employees will be charged with building the next-generation of Ford’s 3.5L EcoBoost V6, which will debut in the 2017 F-150.

Interesting that in the past sales breakdown of F150 engines: 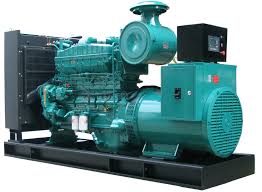 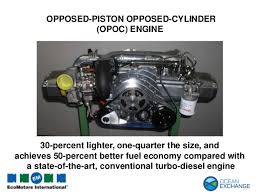 Multi-Cylinder Modular Development Engine The A48-3-16 shares most of the power cylinder with the A48-1 and in an effort to reduce the development schedule, many components are compatible. Similar to the A48-1, the A48-3-16 is designed for a peak cylinder pressure of 200 bar with overload conditions of 220 bar. The block was cast from compacted graphite iron (CGI).

AND DOE FUNDS ENGINE DESIGN. You may remember that I was writing about an interesting engine concept a few years ago, early in 2011 to be exact. And now I can do it again.

It’s not a new design, actually quite an old one, but its potential to power trucks has not been explored in the past as far as I’m aware.

I first wrote about the opposed-piston/opposed-cylinder ‘OPOC’ engine from EcoMotors International, based in Troy, MI and now owned by Chinese interests. At the time Navistar had just signed a development agreement with that small outfit to help bring the engine to market, but that came to naught.

Then I discovered another opposed-piston engine on the scene, this one called the ‘Achates’ coming out of a company called Achates Powerin San Diego. It was a compression-ignition two-stroke diesel that aimed at heavy-truck applications, but it seemed to fall off the radar too.

Achates Power has in fact just been awarded US$9 million by the U.S.Department of Energy to develop a new ”disruptive” internal-combustion engine in partnership with Argonne National Laboratoryand Delphi Automotive.

This time it’s running gasoline, not diesel, but it’s still an opposed-piston design. And a compression-ignition design at that, claimed to yield ”dramatic efficiency and emissions gains” that demonstrate the capability to meet GHG and fuel-economy targets in 2025.

Funded by the DOE’s Advanced Research Projects Agency, Achates says the engine will yield fuel-efficiency gains of more than 50% compared to a downsized, turbocharged, direct-injection gasoline engine while reducing the overall cost of the powertrain system.

Achates, Argonne, and Delphi expect to spend a total of $13 million on the program. That isn’t really very much money in the R&D context so let’s hope there are other funding sources down the road.

“Our OPGCI engine will dramatically reduce petroleum consumption and CO2 emissions, while meeting current and future mandates for low-criteria emissions in cost-effective, high-volume products that consumers will love driving,” he continued.

The three-year project will deliver a three-cylinder, 3-liter  engine applicable to large passenger vehicles, pick-up trucks, SUVs, and minivans. Due to the nature of its engine architecture, Achates says this technology is readily adaptable to two- and four-cylinder engines that can be used in small SUVs, CUVs, and mid-size cars, as well as the heavy-duty pick-up market.

No word on opposed-piston gasoline engines for medium- and heavy-duty use, not surprisingly, but the diesel concept is still alive. In fact, Achates made a presentation at one of the Phase 2 public hearings this fall.

“By adopting the Achates [diesel] engine, OEMs can meet the 2027 goals with a solution that costs less than today’s engine,” he told National Highway Traffic Safety Administration and Environmental Protection Agency committee members.

But back to gasoline…

Argonne National Laboratory has been developing gasoline compression in a series of conventional development engines for nearly 10 years. Their expertise in gasoline compression, computational fluid dynamics, and engine modeling and simulation will be a key to the success of this project.

Achates Power videos can be seen on its YouTube channel.